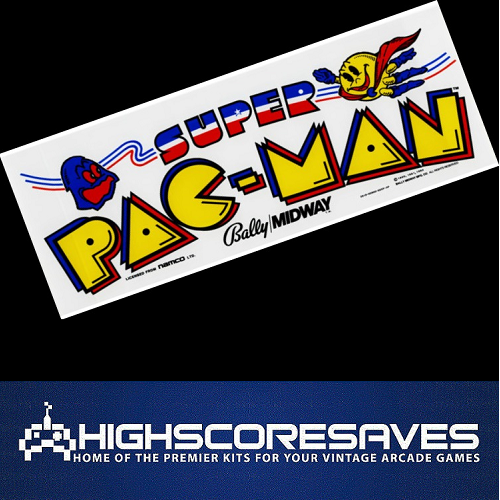 Want to solve the issue of having free play and save your high score? Well, the new Super Pac man kit does it! Along with other features like FULL attract sound and on screen dip settings, this easy to install kit is for you. This kit plugs into your 6809 socket.

Many key elements of Super Pac-Man are similar to Pac-Man, but there are also multiple twists. In Super Pac-Man, players do not encounter dots. Instead, they must seek out keys. These keys open doors that was previously unavailable to Pac-Man. Once opened, players are able to consume various items necessary for completing each stage.

Super Pac-Man can move in all four directions, and in addition, he can increase his speed when the right item is eaten. While certain parts of the maze are blocked to Pac-Man when certain keys remain on the screen, this installment in the series allows players to travel in and out of the ghost box at will.

While collecting keys, Pac-Man also needs to keep tabs on the four ghosts. Coming in red, orange, pink and blue, ghosts chase Pac-Man throughout the maze unless he eats a power pill, in which they retreat. When ghosts are weak, they turn blue and flash white when the effects of the power pill are about to wear off.

Regular power pills give Pac-Man the power to eat ghosts and more quickly complete each maze without interruptions, but super power pills have even more bonuses. Giving Pac-Man the ability to move twice as fast as normal, he also grows two times his normal size. You will need to press down on the action key in order to activate Pac-Man’s super speed.

On each board, the maze itself remains the same. In total, players must complete 16 rounds that get more and more difficult. There are 15 keys, two super power pills and four regular power pills. One bonus item appears every round, and some levels are considered to be bonus stages. During these rounds there are no ghosts.

Stars are another type of bonus item that players should keep an eye out for. These stars always appear directly below the ghost box, between two sets of doors with images of bonus icons cycling through.

Like the original Pac-Man, there are also animated intermissions in Super Pac-Man. Four sequential animated shorts play after rounds 2, 6, 11 and 16. Once you make it to the last level, the last animation will play again and again as you finish each board.

One special feature included in Super Pac-Man is the door busting bonus. Normally, when a key is collected, players can simply use it to open it up. However, Pac-Man can also run into an unopened door. This will help to add to the player’s score.

Collecting a star bonus icon gives players 200 points. However, there are also two boxes that contain pictures of bonus icons that change randomly. Players that are able to pick up the star icon at the exact moment that the same time images appear will get anywhere from 2,000 to 5,000 points.

Power pills repel ghosts, allowing Pac-Man to consume 400 points per individual ghost consumed. The point value for each ghost doubles when they are eaten in succession.

Super power pills make Pac-Man both stronger and faster. In fact, he grows larger in size than the paths that he follows, and he can overcome his enemies very easily. Bonus icons come up only once per level, giving players anywhere from 10 to 160 extra points.

Ghosts – Four ghosts follow Pac-Man wherever he goes. If eaten, they regenerate after a few seconds and continue the pursuit.

Pac-Man – This is the main character that players use to complete each maze. Pac-Man is bright yellow in color, with a large mouth that chomps as he moves.

Power pills – Only four power pills appear on each level, but they temporarily give player the power to thwart ghosts. For a few seconds, ghosts can be eaten by Pac-Man and disappear from the screen.

Keys – In order to clear the maze, Pac-Man must find and collect all keys that are scattered throughout. Some keys open multiple doors while others only work on one.

Doors – Locked doors block Pac-Man’s path to food and other icons. Once opened, he is able to clear each maze and move on to higher levels.

Stars – Stars are another type of bonus item that appear from time to time. These bonuses are worth anywhere from 200 to 5,000 extra points.

How to Play Super Pac-Man

Using the directional arrows and the action button, players are able to steer Pac-Man in the right direction and complete each board. There are 37 doors, 15 keys and 31 additional items for Pac-Man to collect on each level, not including bonus items. When a key is collected, the door that it works on will turn a different color. This door can literally be anywhere within the maze, which is something that makes Super Pac-Man even more challenging.

Level 1
At the beginning of this stage, players will encounter the standard Super Pac-Man maze for the first time. The apple bonus item, worth 10 points, will appear at some time. In addition, a star bonus icon will appear when approximately 50% of the board has been completed. If the coast is clear, you can try to wait until the two rotating sets of images are synched up to collect a bigger bonus.

When all of the keys have been collected, the doors have been opened and the standard items have been eaten, level 1 will be cleared.

Level 2
The banana bonus is worth 20 extra points. The game play will almost be identical as seen in level 1, except the ghosts will move slightly faster. You can try collecting all of the keys first before going through doors, or you can open doors as you find the right keys. Clear the board to move onto stage 3.

At the end of this level, you will see the first animated short in Super Pac-Man. In this intermission, the ghosts will pursue Pac-Man until he eats a super power pill and goes after them.

Level 3
Power pills and super power pills will start to come in handy during level three. As the ghosts increase in speed, it becomes easier for Pac-Man to get trapped in a corner. Only eat items that give Pac-Man special powers when completely necessary. In addition, avoid going after blue ghosts that have fled into the ghost box.

The donut bonus icon is worth 30 points. Collect it if time permits.

Level 4
At the start of level 4, you will definitely notice that the ghosts are starting to move at a steadier pace. Also, ghosts will start to work together in teams in order to get Pac-Man. Get the burger bonus icon to add 40 more points to your score.

Level 5
The fried egg bonus is valued at 50 points. Ghosts will continue to get smarter and faster, so collect keys as quickly as possible to progress.

Level 6
During level 6, the corn bonus will appear. Eat it to increase your score by 60 points. This level also features an animated interlude. A huge version of one of the ghosts chases Pac-Man.

Level 7
This stage features the sneaker bonus item. Worth 70 points, players should only go after it if the ghosts are not looming.

Level 8
A piece of cake worth 80 points is the bonus item on this level.

Level 9
At this stage, the ghosts are moving at a phenomenally fast speed. Pac-Man will need to act fast if he is to collect all of the keys and open the corresponding doors. Get the flower bonus item for an extra 90 points.

Level 10
Pick up the bonus icon that looks like a bunch of grapes for an additional 100 points.

Level 11
Level 11 includes the cup of coffee icon, worth 110 bonus points. When the stage is complete, the third animated interlude will begin to play. All four ghosts will chase Pac-Man until he leaves the screen. Upon returning, they notice that he is now in his super sized mode. The ghosts run and the animation ends.

Level 12
Find the mushroom bonus item and get 120 points.

Level 13
A bonus icon that looks like a bell is standard for level 13. Worth 130 points, players can quickly increase their scores with a quick detour.

Level 14
Stage 14 features a four leaf clover for a bonus item. This bonus is valued at 140 points.

Level 15
The infamous Galaxian symbol makes an appearance during stage 15. For an additional 150 points, steer Pac-Man in its direction.

Level 16
This is the last and most difficult stage in Super Pac-Man. It is best to immediately go after a power pill, then eat keys and open doors until its time is up. Repeat this process until you clear the entire stage. You may or may not have time to go after the present bonus icon, which has a 160 point value.

Once level 16 is completed, players get to see the last animated in Super Pac-Man. Super Pac-Man makes a return, chasing ghosts until they leave the viewing screen. Next, a huge group of standard sized Pac-Man clones enter the screen, still pursuing the ghosts.

Technically, this is the end of Super Pac-Man, but you can continue to play. Each level will get harder to beat.

Hints and Tips
- Make use of the tunnels when you have no other way to go. Remember that ghosts can go in both ends of the tunnel at the same time, so this is not always a safe escape route.

- Pay attention to the time limit set in bonus stages. Since there are no ghosts to battle, you should put all of your energy into getting the bonus items. When these stages are completed when there is still time left on the clock, the excess time is converted into bonus points.

Please check out the installation instructions before purchase/installing.

This save kitnis the best of both worlds!

Can save scores and have free play at the same time with this awesome kit!

Saves scores and has freeplay

Board is nice but the PCB is hitting my cage

Board is working but it’s up against my PCB mounting cage. I had to use electrical tape on the cage and on the backside of the high scoreboard. I also had to use another socket to lift it off of the board further just to make it fit. But it’s still up against my cage. You need to move the board down and not have it hang over. There is no room for hang over. This is a super pac man machine that’s been in a home since new. It’s all original

Best of Freeplay and score saving

No other kit can do this. It's a smart option for me

Best of both worlds

Much needed kit with freeplay

It's the only game in town!

Great kit for our Super Pac!!!

Solved all my issues

We love the great features this kit provides

Just what I needed, perfect kit

The greatest kit. Been looking for a solution of having scores saved and freeplay at the same time. This is the only thing out there!

Great kit! I now can have free play and save my scores. The full attract sounds is a great thing for my home arcade. Thanks!

Write a review and tell everyone what you think about this product
Reviews will be activated after verification.
FAQ 1
Questions and Answers... more
Menu
Here are some common FAQ's / Questions for this product
Ask a question about this product
Thank you! We will try to answer them as soon as possible and post it here if appropriate for others.
Does this save settings?
From Christopher S on 08.06.2020 14:15.

Does this save settings?

Of course! All of our kits save settings (dip switch), have free play and saves all your scores! Pretty cool, huh?