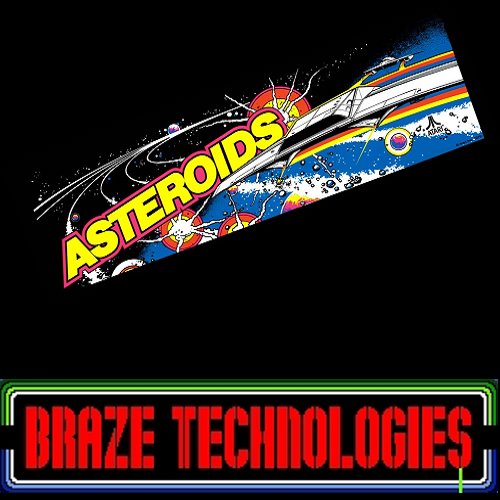 Easy to clear out the high scores when desired. Simply put the game into selftest (using the cabinet selftest switch). Once in selftest mode, press (and hold) all four of the following buttons (left,right,fire and thrust). The screen will imediately show "ERASED" indicating the high scores have been cleared out. This is the same procedure used by Asteroids Deluxe to reset the high score table.

High scores and initials can easily be cleared out at any time by putting the game into self test and pressing all four of the following buttons (left,right,fire and thrust) at the same time.

Easy to install save kit for Asteroids

Write a review and tell everyone what you think about this product
Reviews will be activated after verification.
FAQ 1
Questions and Answers... more
Menu
Here are some common FAQ's / Questions for this product
Ask a question about this product
Thank you! We will try to answer them as soon as possible and post it here if appropriate for others.
Both LED start buttons are solid red
From Rob on 09.07.2021 01:38.

Hi I bought this kit in October and just got around to installing it , I get 2 solid red start buttons and no screen When I remove it my game plays fine Any idea on any issues that would cause this ? I’ve been repairing arcade boards for over 25 years and I’m not sure what would cause this?

A common mistake is not having the daughter card inserted correctly, either hanging over the socket by one pin, or in backwards. In this case the screen will be blank and the start LEDS are probably lit.

Another common mistake is for the 6502 CPU to have been inserted incorrectly, either backwards, or possibly with a pin bent that did not insert into the socket properly.