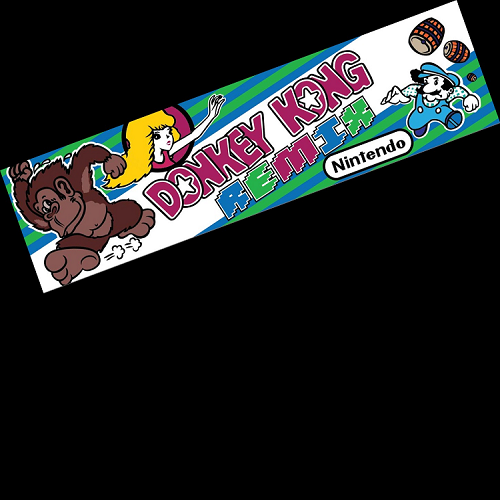 Some of the trainer's features include -

This plug and play kit will allow you to play five varations of Donkey Kong:

Compatible with D2K multigame kit.  Have both kits installed at the same time on your Donkey Kong board!

Plus these Deranged Edition features -

How to switch between Games/Trainer -

Normally, you switch between games by pressing and holding the jump button.

Here's what you get so far...  during gameplay,

On the left side of the screen:
-Your score (total)
-Your score (on this board)
-Lives
-Total points that could be earned leeching kong in the time that is left (appears on rivets board only)

Center:
-High score (I'll replace this with a Pace display in the future)

On the right side of the screen:
-Game speed (currently selectable between 20% and 150%)
-Points earned from jumps (on this board)
-Points earned from hammer smashes (on this board)
-Level indicator
-Internal difficulty indicator, plus time in seconds till the internal difficulty goes to the next level.
-Bonus
-Hammer time left (in seconds and milliseconds, when hammer is active)
-Time till next fireball/firefox spawn interval (seconds/milliseconds, on rivets and pies only)
-Scrolling spring I.D. display (on springs only)

Playfield:
-Indicator for pie spawn cycle (on pies only)
-"always 300 points" Pies are indicated by their blue color (on pies only)


And...  The 1P and 2P start buttons can be used to control these features,

2P button:
-quick tap resets the board.  No lives lost.  Your score is restored to what it was before you started the board.  You can use this to retry the board as many times as you like, restart if you mess up a move, or just want to practice something over and over.

-slower tap skips the board.   Whatever is on the bonus timer gets added to your score and you move to the next board as if you completed it.   You can tap slow taps during the "How High" screen to keep skipping till you get to lets say 5-1.

-hold down (for at least 3 seconds) and let go.  Quit back to attract mode.


The idea here is that you can play a game as if it were a normal DK game, but it allows you to retry stages if something didn't work out.   Only the last play on a board will count - this would allow you to judge what your score would be if no mistakes ever happened, etc...

For practice play, the speed controls will allow you to try pixel-perfect moves at slow speed to work out the timing, then speed it up incrementally until you can do it in real-time.   For reaction time training, speed the game up >100% and play and then when you go back down to regular speed it'll be easier to manage.

New and remixed gameplay mechanics include -

This is a must for any DK lover. It's great to play new variations. What a truly amazing product!

Took about 3 minutes to install and 1 minute to select my settings. So fun to play the new stuff and keep my high scores along with free play. Well worth the money!

Works for my cabinet when stacked with D2K

I previously had the D2K kit, and thought I’d try to stack this kit with the D2K kit. I know some have encountered power supply issues when attempting this, but I was pleased to find it works in my cabinet. The Remix kit adds quite a few options. A nice addition to my cabinet!

Write a review and tell everyone what you think about this product
Reviews will be activated after verification.
FAQ 3
Questions and Answers... more
Menu
Here are some common FAQ's / Questions for this product
Ask a question about this product
Thank you! We will try to answer them as soon as possible and post it here if appropriate for others.
Can this Remix kit be "stacked" with D2K?
From Rick G on 10.06.2020 13:30.

I heard that this kit can be stacked with the D2K high score save kit. Is this true?

Can it be done? Yes.

Do you have to ensure that you have adequate power in your cabinet? Yes

These original cabs have great power supplies, they're usually still working...even after 40 years! No one would have thought that they'd be still around, yet alone kits that would add more features. Now, each kit can take an additional .1 volts to .3 volts. That is usually no issues with a single kit.

If you stack 2 kits together, this will double the volt requirement on your 5 volt line...being approximately 10% more voltage being drawn from your power supply! Remember, this power supply is 40 years old!! So, it can cause some issues with the pcb not booting, garbage artifacts and more.

Some have had success with stacking these kits together. Some machines have not. Some have replaced the old power supply with a modern switching power supply (or recapped the old one) and have been running strong with the 2 kits stacked.

You would also need to stack these a certain way. Step one, remove the z80 on your pcb. Second, install the D2K kit in the now empty spot. Third, install the Remix kit on top of the D2K kit (correct orientation). Lastly, installl the z80 in the Remix socket.

Greetings. I’m just wondering if the DK/DK2/DKPE would work in conjunction “stacked” with the DK remix multi game kit?

Technically, no. Pauline uses the 5 eproms we sent with your kit, or, the one ones you downloaded and burned from the product page. With those installed, which give you the Pauline char set....the Remix kit doesn't play well with them and will have strange "artifacts" on the screen when trying to play Remix....

While everything plays, it just looks weird.

Can I load other roms into this (say by combining bin images from mame) and then writing them into your rom?

Short answer, no. This is by design