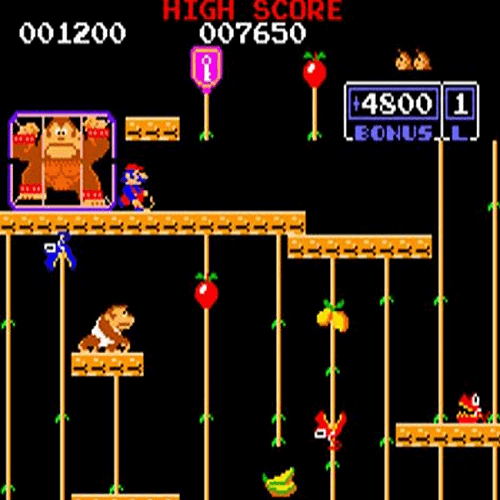 Some of the most common failures I've seen with DK and DKjr boards are that either the cables that connect the two boards have become lose or that the contacts of the socketed components have become dirty and are not making good contact. Removing, cleaning, and reseating the scoketed chips is always one of the first things to try in reviving a board before digging deeper.

The only gameplay problem that I've seen myself is when the game seems to be operating fine in attact mode, but once you start at game, very shortly after it has started the game resets. This problem was that Eprom chip 5E was bad. I guess the way the program is segmented, chip 5E is does not get exercised much or at all until a game is started.

DKjr uses a goofy memory map in terms of what Z80 memory locations are mapped into the three 2764 eproms (5B, 5C and 5E). One would normally think that each chip would contain a contiguous memory address space, but for DKjr each of the 8K byte eproms are divided up into four 2K blocks.

When the Z80 boots up, it will first execute code at memory location 0x0000 (chip 5B). If this chip is bad most likely nothing will be displayed monitor. After initializing memory, the program will jump into code space in chip 5?. If chip 5? is bad, I think you will see only the "1 UP" in red and "L=00" displayed in blue.

DKjr has a hardware watchdog timer. On DK, the schematics do not show a watchdog timer, but on all the 2boardset DKs there is also a DK watchdog. Not sure about the 4boardset DKs. If the hardware watchdog timer is not refreshed every so often, the timer will expire and reset the game. The watchog timer is implemented with chips xx, yy, and nearby resistors and capacitors. The timer is refreshed by the CPU accessing memory location 0x7d00 which is the port used to read the coin, P1 and P2 inputs. The 0x7d00 decode can be found at pin x of chip y and in normal operation should be pulsing quite frequently. The watchdog timer can be disabled by cutting CLx on the CPU board.

When the game powers up, you should hear a short swirling sound. This is normal. (I think you will hear this sound even if the main Z80 CPU is not functioning).

No sound at all, neither background music, sound triggers or even the powerup sound. First, understand Nintendo DKjr (and DK) boards require an external audio amplifier. Even though there are components layed out on the PCB for an onboard audio amplifier, I've never seen a Nintendo board have these (however, it is common for the bootleg variations to include the builtin audio amplifier). Assuming the external audio amplifier is working, make sure the board has +5v, +12v and -5v. Missing any of these and you probably wont get any sound. Also, power must be applied to both boards. The ribbon cables that connect the two boards on the one end do not carry power between the boards (only ground). You need to make sure you either supply power to each board via the separate connectors or by using the rainbow colored jumper wires to connect the two boards together. Usually if there is no power to the other board, you will not get any video or sound. Assuming power is present, check capacitor C13 (4.7uf). This capacitor is in series as the last output stage of the audio pre-amp, and acts as some sort of filter. If this capacitor is broken or not present you will not get any sound.

No background music, but other sounds are ok. Background music is mainly controlled by the 8035 MPU at location 7H on the CPU board. The code for the MPU is stored in 2732 Eprom at location 3H. If these chips are socketed it, remove them, clean the contacts and reseat them. It is very common for the 8035 MPU pins to be very tarnished. On some boards the 8035 is soldered in and not socketed.

Jump sound is missing. This turned out to be the capacitor C24 (47uf) on the CPU board was broken (open).

Weird background noises in conjuction with music. This turned out to be the capacitor C32 (10uf) on the CPU board was broken (open).

Crash sound incorrect, distorted and double (ie. 2 back to back crash sounds). After replacing C25, C29, Q2, and 8N, I noticed that diode D1 was factory installed backwards. This is the 2nd time I've seen a diode be installed backwards at the factory. Reverse D1, problem solved.

Climb sound wrong pitch (very high) AND jump sound wrong pitch (too low). After replacing C17, C16, C22, and C19. I replaced 6L (4020) counter chip. That fixed it. Lesson here is that these two sounds share some common circuitry, so if both sounds are bad, try the common stuff first.

No moving objects. This can be just about anything, but in this case it was a bad chip 5P (7430) on the video board.

No video sync pulses, but game plays. Oddly, problem was isolated to the CPU board. R92 (200ohm) was open.

There are 5 analog sounds with DKjr can produce. Each with its own (sometimes shared) separate circuit. Any one of these can easily fail independently.

Walk and Climb share much of the same circuit and only the pitch is different. Lower for walk, higher pitched for climb.

Jump sound shares some common circitry with Walk and Climb above.

All of the other sounds, spin, credit, die, and music are generated digitally by the 8035 MPU. Typically these sounds either all work, or all fail.

The funny powerup sound is basically all of (or most of) the analog sounds playing at the same time. You only need +5V and a CPU board to get these sounds. (you can disconnect -5v, +12 and the video board and still get these sounds).

Most of the analog sounds use a 74123 one-shot to control the duration of the sound where a resistor/capacitor combination controls the pulse width. Typically this does not fail. The output of the one-shot is then used as the final trigger to play the specific sound.

The analog sounds and the digital sound output are all "wired-or'd" together to form the unamplified audio out. The signal then enters a circuit which contains C161 (1uf) Q1 (2SC1815) and C13 (4.7uf). If there is no digital and no analog sounds, suspect one of these components (suspect the capacitors first). You can probably short across either of the capacitors for testing purposes.

No video at all. Remember, Nintendo DKjr (and DK) use inverted video. Inverted in terms of the colors, similar to how a photo negative looks. The Nintendo monitors then re-invert the colors back to normal before displaying them. Next, make sure correct power is being supplied to both boards. The ribbon cables that connect the two boards on the one end do not carry power between the boards (only ground). You need to make sure you either supply power to each board via the separate connectors or by using the rainbow colored jumper wires to connect the two boards together. Usually if there is no power to the other board, you will not get any video or sound.

Screen scrolling right/left. First check the two POTS on the video board. It is common for these to have a broken pin on them, as they are tallest component on th board and tend to get bent and broken over time. The two POTS control the vertical and horizontal centering. If those POTS are OK, then check nearby C14 (0.022uf) to see if it is broken or bad.

Lots of speckeled diaganol lines usually means one of the video adjustment POTS is broken. You can short a 10K ohm resistor across it and see if it clears up. It is common for these pots to be physically broken.